Share this:
As has become traditional, St Anne’s Park, Raheny, is the venue next Sunday (January 8 ) for the Dublin Masters Cross-Country Championships -  which is second only to the All irelands in terms of size and attracts entries from almost every Dublin club. For the second time,  the Pat Hooper Perpetual Cup  will go to the best overall club based on results in six age categories (men and women over 35, 50 and 65) spread over four races. Appropriately, Raheny Shamrock AC—Pat’s own club—are the defending champions. Opening the day’s programme at 12.30pm is a 3000m race for women over 50  and for both men and women over 65.
That’s followed by a 6000m for men over 50 (12.55pm ); then a 4000m for women over 35, 40 and 45 (1.30pm) ,  and finally a 6000m for men over 35, 40, and 45 (2pm).  Clubs can enter as many athletes as they like, with the top three finishers scoring. Entry fee for the race is €8 per athlete with registration open at www.myresults.com until midnight on Thursday, January 5. Numbers can be collected at the start.
*A record number of over 500 turned out for last year’s  Dublin Masters Cross-Country, when Mick Clohisey of host club Raheny Shamrock AC and Barbara Cleary of Donore Harriers were the individual winners.
HOLIDAY RESULTS ROUND-UP
Over the shorter distance of 5km, Abdel Laadjel of Donore Harriers, home on a break from his college duties in the USA, won a thrilling Tom Memorial 5km in Dublin’s Phoenix Park. In the sprint for the line, Laadjel  just held off Stephen Cashin of Clonliffe Harriers  and Colin Maher of Ballyfin AC with the trio timed at 14 mins 54 secs, 14:55 and 14:56. The women’s race was less of a nail-biter, with Edel Monaghan of Dublin City Harriers a clear winner in 17:07. Lauren Murphy of Cilles AC was second in 18:22 and Ciara Wilson on DMP AC third in 18:24. Defending champions Raheny Shamrock AC, led by David Rooney 11th, proved best of the seventeen men’s teams  entered beating Donore Harriers by three points with Drogheda and District AC third. Equally close was the women’s team race with  last year’s winners, DCH AC beating Sportsworld by three points and host club Liffey Valley third.  The full resulta are on the Myrunresults website at https://www.myrunresults.com/events/tom_brennan_new_years_day_5k/4608/results.

By some way the most historic race held  over the holiday period was the 126th Waterhouse-Byrne-Baird 10-Mile Open Handicap in the Phoenix Park on St Stephen’s Day, December 26. The race, organised by Donore Harriers, was first held in 1896 when the winner received a shield donated by Messrs Waterhouse and Co Jewellers. It moved from its original venue at Meadowbrook in Dundrum to the Phoenix Park in 1934, where it has remained ever since, taking in loops of a two-mile course around the Dog Pond. Deirdre Nic Canna was first across the line in 87:36 with Emmet O Briain just three seconds behind and the  handicap format of the race providing an exciting finish, especially since Nic Canna and O Briain had started nearly ten minutes apart! Fastest time of the day was 62:38 recorded by Ian Fitzgerald who finished 9th overall and took the Tommy Hayward cup for that honour. Fastest woman was  the winner Deirdre Nic Canna with a time of 72.06.

Also on St Stephen’s Day, many times previous winner Mick Clohisey of Raheny Shamrock AC made his annual St Stephen’s Day pilgrimage west for the Streets of Athenry 10km, where he finished a respectable third in 30:57. In Wicklow, marathon man Tudor Moldovan of Clonliffe Harriers finished third in the Streets of Wicklow 5km in 16:12. Expect both Clohisey and Moldovan to be in the mix at the Dublin Masters! 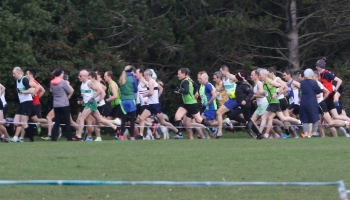