ANOTHER RECORD FOR RHASIDAT

Rhasidat Adeleke of Tallaght AC produced the Dublin athletics performance of the week when she  broke her own Irish 200m indoor record with a time of 22.52 at the Dr.Martin Luther King Collegiate Invitational in Albuquerque  on Saturday (Jan 21). Adeleke’s winning time was more than three-tenths of a second faster than her previous record of 22.85, set in Albuquerque last February. Adeleke also ran 7.20 seconds in the 60m dash, finishing second behind team-mate Julien Alfred, whose winning time of 7.02 set a new NCAA record.

Another Dublin club athlete in record breaking form was Eric Favors of Raheny Shamrock AC whose 19.99m effort when finishing fourth in the shot putt at the American Track League in Iowa City on Friday (January 20)  broke his own Irish record. Favors is in the form of his life after breaking the 20-metre mark several times last year and last August, breaking Paul Quirke’s thirty-year old record of 20.04 with a massive putt of 20.50m.
At the NIA, Abbotstown, in the fourth round of the Track and Field Live series on Wednesday evening (January 18)., Shane O’Neill of Rathfarnham WSAF AC ran a time of 4:36.10  for the mile which is a Irish M50 record over a distance rarely run indoors.
In Kirchberg, Luxembourg, Georgie Hartigan of Dundrum South Dublin AC clocked a time of 4:18.85 to finish seventh in the 1500m at the CMCM Indoor Meet on Sunday (January 22).
LAST CALL FOR 39TH AXA RAHENY 5
All roads lead to Raheny next Sunday where over 3,000 are expected for the 39th AXA Raheny 5-Mile road.  Defending chmapion Efrem Gidey of Clonliffe Harriers is the form athlete on the roads at the moment and will take some beating. Leading a strong entry from Leevale AC is Ryan Creech, who will run the Seville Marathon on February 19. Last year, Creech finished just five seconds behind Gidey.
Mick Clohisey, winner in 2015 and 2019,  will lead the home team  from Raheny. Clohisey, the Dublin masters cross-country champion for the past two years,  warmed up by winning the Ferrycarrig 5-Mile in Co Wexford on Sunday with a time of 24 mins 51 secs. The usual strong contingent is also expeted from Northern Ireland clubs. As for the women, the competition is wide open. Among those entered is  Lizzie Lee, winner in 2015. Lee showed that she’s well recovered from a recent ankle injury when winning the IFF-Dupont BHAA 5km at Little Island last Sunday with a time of 16 mins 11 secs. She is part of  a strong Leevale squad.
* The Raheny 5  gets underway at 3pm sharp;  the first of four children’s races starts  at 1.30pm. Entry is still open at https://eventmaster.ie/event/RpwlfL5h76. Entry fee is €25 for the main race and €5  for the juvenile races.
CROSS-COUNTRY
At the CrossCup Hannnut in Belgium, a World Athletics Cross-Country Tour Gold  event, Emmett Jennings of Dundrum South Dublin AC finished  20th in the men’s 9km race with a time of 30:16, In the women’s 8km,  Lauren Tinkler of Dublin City Harriers  and Fiona McKenna  of UCD AC were given the same time of 30:42 finishing 19th and 20th. Brussels in Belgium will host the European Cross-Country Championships next December.
At a more local level, Aoife Carroll of host club Sportsworld RC made it two wins from two races at the Meet and Race (formerly Meet and Train) women’s cross-country league race in Tymon Park, also on Sunday.
In perfect conditions for cross-country,  Carroll pushed the pace from the start finishing with a time of  12 mins 17 for the two mile course. Cristin Scollard of Blackrock AC was second in 12:34 and Sinead Tighe of Brothers Pearse AC third in 12:26. Other clubs represented in the team categories included Crusaders AC,  Donore Harriers, Clonliffe Harriers, Lucan Harriers, Esker Runners, Waterstown Warriors, Love2Run, and Dunboyne AC from Co Meath, who hosted the first round of the league.  Organisers were Sportsworld RC (course), helped by Brothers Pearse (refreshments). New clubs, groups and individuals are welcome to join in the fun with the next race scheduled for mid-February although there are difficulties finding a venue - not just a park but also a hall for the all-important post-race cuppa. All offers welcome.  Other dates are March 12 and then April 16 for a fun run/league final at Irishtownn on April 16.  Contact is Fiona Shine at  Pics at https://www.flickr.com/photos/lindie/albums/72177720305429412. 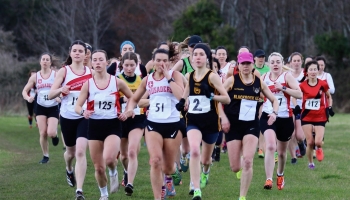 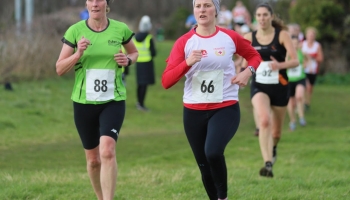 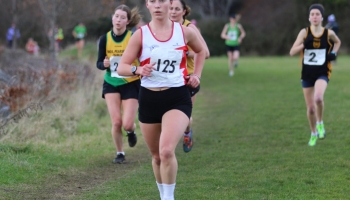 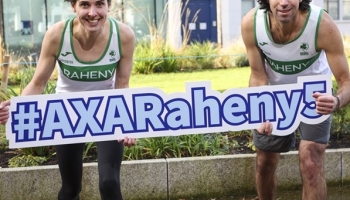